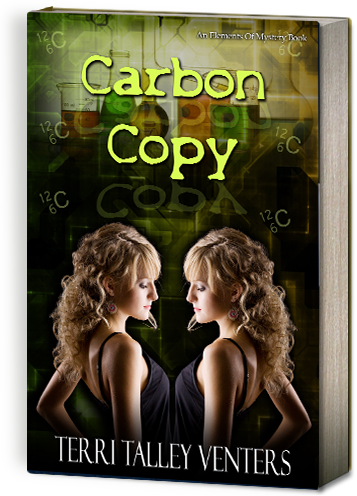 Grier’s hands brushed Lilly’s neck. She looked up and saw his handsome reflection in the mirror. She hadn’t heard him enter the apartment. He stood behind her in his tuxedo. Hot damn, he looked good! Something sparkled on his fingers. He distracted her by brushing his lips on her ear while he slipped something around her neck. The diamond and sapphire necklace looked beautiful. It was the perfect touch. The teardrop pendant fell between the top of Lilly’s breasts. She felt like Cinderella going to the ball.

“You are so beautiful, Lilly Beth,” Grier said. He circled his arms around her.

Incapable of a verbal response to this generous gift, Lilly turned around and rewarded Grier with a passionate kiss.

“Get a room, you two!” Luke’s voice boomed down the hallway.

“Don’t you know how to knock?” Grier asked without taking his dreamy eyes off of Lilly.

“Dude, you were just tonguing my sister.”

“I’d probably be doing a lot more than kissing your sister by now if you hadn’t barged in.” Grier tightened his grip on her waist.

“Are we ready, gentlemen?” Lilly asked in order to break up the banter.

Lilly, Grier, and Luke arrived at the Plaza fashionably late. Grier had arranged for his dad’s limo to deliver them to the “A list” event in style. As she exited the limo, cameras flashed in her face as if she were a movie star. She basked in the attention and could definitely grow accustomed to this star treatment. They strolled through the lobby while the curious hotel guests gawked at the attendees for this event who paid a thousand dollars a plate.

At the ballroom, Lilly stopped to take in the spectacular view of Central Park and the city’s breathtaking skyline. They presented their invitation at the door and made a grand entrance. Lilly stood with Grier on one arm and Luke on the other. She possessed the two best dates in the city.

Grier whispered in her ear, “I see the mayor and Senator Robinson.”

“And I see the President of NYU schmoozing with a Rockefeller. And a UN ambassador with his trophy wife.” Lilly nodded.

The bar beckoned, and they quickly made their way to it. Grier ordered his Tom Collins, Luke ordered his beer, and Lilly ordered her chocolate martini. As they meandered towards the terrace, Luke took a sip of his twin’s delicious drink. His eyes looked worried, as if he hoped no one spotted him enjoying a girly cocktail.

“Dude, if you’re going to drink a girly drink, you need to check your testicles at the door,” Grier said, teasing Luke. He turned to Lilly. “My father wants me to speak with Wendy from the American Cancer Society and Fred from the FDA. I see them over there. I’ll be back in a little.”

Before he could leave, Lilly and Grier got trapped in a succession of meaningless conversations. The next half-hour blurred into “How do you do?” and “I just love your dress! Is it a Dior?” The shallow conversations with a bunch of people she didn’t give a rat’s ass about wore on her. Only being on Grier’s arm and her years of mingling saved her from showing it.

In a lull in the conversation, Lilly noticed Luke never returned from his second trip to the bar. “Excuse me, Grier, but I’m going to find out where Luke went.”

Grier gave her a quick kiss on the cheek and nodded as another business associate approached. Lilly made a quick escape in search of her brother. She found him returning from the VIP lounge, also known as the men’s room.

“I should have never broken the seal.” Luke shook his head and grimaced.

Lilly chuckled at Luke’s reference to the obscure law of physics, applicable only when drinking alcohol. Once a person used the bathroom, trips would become more frequent.

“You can’t help the fact you have the bladder of a girl.”

They meandered to a quiet corner and decided to do some people watching. Seeing Grier engrossed in conversation with a group of dreadfully boring looking people, Lilly hesitated, reluctant to return to his side.

“Look at all of these hookers.” Luke’s gaze scanned the room.

“Luke! What are you talking about? These are very wealthy, prominent, women who are very high on the social ladder.”

“They’re still whores, though, just expensive ones. Do you see the one over there?” He pointed to a young, well-jeweled, brunette. “She loves me. She just doesn’t know it yet.”

“Have you been smoking crack? She’s probably attracted to the metro-sexual type or those European men with fascinating accents and big yachts. You don’t stand a chance of getting touched by anyone besides yourself tonight,” Lilly said.

“Seriously, she would love my type for a few hours. These little rich girls are rebels and love to go slumming for a roll in the hay.”

“Luke, I wouldn’t call a roll in the hay with you ‘slumming it.’ It’s not considered slumming if a person possesses a trust fund. So are you going to go talk to her or not?” Lilly encouraged her shy twin.

“Oh! You are terrible!” She smacked his arm and pretended to be shocked.

“Actually, she’s not my type. She’s way too skinny for my taste. Her face looks gaunt and her body anorexic. Having sex with her would be like screwing a rake. There’s nothing to hold onto. I like a woman with some meat on her bones. I like Reubenesque women.”

Lilly applauded Luke’s increasing vocabulary. And she grinned at the entertaining conversation. Unfortunately, the few moments of reprieve were short-lived. She shrugged as Grier motioned for her to return to the group and partake in more dreadful conversation. She glanced at Luke and pleaded with her eyes in hopes he’d join in. Misery loves company.

He shook his head and smirked. “Sorry, sis, I’m going to stand here and hope a cougar will pounce on me.”

“Fine then.” Lilly hoped the disappointment in her tone would at least give him a smidgen of guilt.

As Lilly walked toward the Create Life crowd, a new member joined it. Oh no, not him, not the creepy guy. His nearly pure white hair and matching skin glistened in the diffused light. An albino if she ever saw one. This nut job made everyone’s skin crawl. Even Jen Jones didn’t have this effect on people. He truly scared Lilly.

Grier protectively slid his hand down Lilly’s back and pulled her close to him, comforting her. He knew Lilly did not care for this man.

“Of course, I remember. How wonderful it is to see you again, Mr. Turner,” Lilly said. Liar, liar pants on fire.

Lilly extended her hand for the obligatory handshake, anxious for the physical contact to be over and done with. The lunatic grabbed her hand and pulled Lilly closer to him. She closed her eyes and hoped her repulsion wasn’t obvious to everyone. He kissed her cheek. Yuk.

Now, Lilly finally figured why everyone called him Tom-Tom behind his back—he stuttered.

The dinner bell summoned the crowd into the ballroom, and everyone sat down to eat. Create Life executives and their wives filled the corporate table. Lilly believed none of the men wanted to be there as they were all workaholics. However, the wives appeared eager for adult conversation since they probably did not work outside of the home.

“It’s not the same without Teddy,” Sammy Morrison said. He gulped his whiskey, obviously saddened by the absence of his friend and former co-worker.

Grier nodded. “Teddy was a dedicated Create Life researcher. He helped clone the cow. A few months ago, he jumped ship and went to work for Morgan Medical Research in Europe. None of us have heard from him since.”

“Lilly Allen,” one of the wives said drawing Lilly’s attention away from Grier, “I feel like I know you from watching you on the news. My name is Sally, Sammy’s wife.”

“It is my pleasure to meet you, Sally.” Lilly shook her hand.

“I just love your show,” she said.

“Why, thank you.” Lilly smiled at the compliment and basked in the attention. She loved talking with her fans. Her ego inflated from this adoring fan.

“Do you have a sister or something?” she asked.

“No, but her twin brother here is going to start wearing a skirt to go with his feminine cocktails,” Grier said.

“Dude, I’m drinking beer. I only took one sip of Lilly’s drink.” Luke chugged his beer.

“Please ignore my two little boys.” Lilly gave Grier the evil eye before she turned back towards Sally, eager for the flattery to continue.

“When I visit my mother in Boca, I work out at this gym. I always see this girl who looks just like you only with short hair. When you were first on the news, I mistook her for you. Then I realized not only your accent sounded more Southern, your hair grew too fast,” Sally said.

“You know, an elderly gentleman told me—today as a matter of fact—he knew someone who looked like me. I must have been cloned or something.” Lilly laughed at her own joke. She found it intriguing, perhaps even downright creepy, to hear others knew somebody who looked just like her. But to hear it twice in the same day? Oy vey!

The rest of the table grew quiet as everyone else suddenly became interested in Sally and Lilly’s conversation.

“They say everyone has a twin out there somewhere.” Sally nodded towards Luke.

Lilly Allen has brains, beauty, and a trust fund. She’s living in New York City and her career as a reporter is taking off. She’s hoping the love of her life, Grier, will propose soon. She has it all, or so she thinks.

Grier Garrison, Create Life executive, is running the company while his father, Dr. Michael Garrison, is in the ICU awaiting a heart transplant. Grier knows the truth about Create Life and its shady side business. He fears Lilly and her twin brother, Luke, are in danger.

While working on two unrelated stories, stolen newborns and cloning, Lilly discovers a shocking connection. Horrific things are happening, but who is behind it all?